Perhaps you woke up this morning with an insatiable yearning, a wish to see a movie tonight with nice, sweet, beautiful Natalie Portman as a ballet dancer, a movie in which she variously stabs herself, gets stabbed by a rival in the face with a nail file, mutilates herself, bleeds profusely, picks at her fingers until they bleed, breaks out in rashes on her back, sees her skin turn into gooseflesh, sees her skin peel away, watches her toes web together, slams her mother's fingers in a closing door, and indulges in at least three types of sexual activity -- hetero (two guys in the men's room), homo (one gal who's into cunnilingus), and mono (Natalie all by herself). Not to mention watching the old geezer on the subway play with himself.
Well, your wish is fulfilled. "Black Swan" is here. Oh, you thought it was all about ballet dancers? As A.O. Scott wrote in The New York Times on Sunday,  “Black Swan” is no more about the behavior of ballerinas than its central pretext, "Swan Lake" is about the habits of birds. In fact, or at least in my opinion, "Black Swan" is a psychosexual horror film that uses a ballet milieu to lend the project a patina of cultural respectability. Think "Texas Chainsaw Massacre" in tutus.

It's also a film that pulls off a hat trick of awfulness. Despite the speculation about forthcoming movie awards, in my humble judgment the directing is painful, the acting is pained, and the film itself is -- a pain.
Directing? If you're a fan of watching dance scenes jump-cut into incomprehension, you'll love it. Of course, the director has to flip the camera from waist-high shots of Portman to waist-down for her dance-double's footwork.  Natalie is a big star, but she's not yet ready for full-body ballet. And to add to the frenzy, the director loves to use herky-jerky hand-held cameras for the dancing scenes, and most of the other scenes as well. I'm considering taking up a collection to buy a tripod for director Darren Aronofsky.
Acting? She may win an award, maybe even the Oscar, but she's not in my awards pantheon. My indelible memory of Natalie Portman's acting in this movie is one of a young woman with a singular expression on her face -- pain. Whether dancing, engaging with others, or just walking in tunnels -- there's pain on her face. Actually, she did change that expression a few times -- when she was indulging in the earlier-noted hetero, homo, and mono activity. Other than those brief departures, her acting evokes Dorothy Parker's barb about Katherine Hepburn: "She runs the gamut of emotions from A to B. (Unfair to Katie, apt for Natalie.)
The film? Simply a mess. The pretension. The sorry attempt to conflate horror with art. The absence of subtlety. The constant looking at my watch -- how much longer do I have to endure this? (Only to collect blog fodder did I stay to the end.)
Any redeeming features? Tchaikovsky's music.
Am I alone?  Just about. Of the major movie critics whose reviews are compiled in Rotten Tomatoes, 31 of the 36 bestowed kudos. Well, you can forget those critics. What do they know? Instead, focus here on these excerpts from an enlightened minority of reviewers:
David Denby, The New Yorker  Aronofsky goes all the way with his taste for mutilation...Off the dance floor,  “Black Swan” is trashy and incoherent...Almost every sequence is shot with a handheld camera...A dolorous performance that’s often on the verge of caricature...“Black Swan” says that a dancer must enter into the irrational and the erotic—even destroy herself—in order to make art. That is, if you don’t get laid, and you aren’t ready to kill your rival or yourself, you can’t be a great dancer.
Kenneth Turan, Los Angeles Times  An overheated slog...It's high-art trash, a kind of "When Tutu Goes Psycho"...this shameless shotgun marriage of "The Red Shoes" and Roger Corman...The director here is the earnest Darren Aronofsky, and his trademark sledgehammer style makes any kind of enjoyment difficult... Expecting subtlety from a Darren Aronofsky film is like expecting Pixar to announce a slasher movie. Not in this lifetime.
Rex Reed, New York Observer  Overrated, overwrought and overhyped...This exercise in hysteria is so over the top that you don't know whether to scream or laugh...the big problem is Darren Aronofsky, whose corny vision of madness is more hilarious than scary. Borrowing every ballet-movie cliché...he's jerry-built an absurd Freudian nightmare that is more wet dream than bad dream, with all the subtlety of a chain saw.
Apollinaire Scherr, Financial Times  The camera stays above the waist. Body double Sarah Lane of American Ballet Theatre provides the precise footwork. We shuttle north to south and back again, with none of the midrange shots of the whole body and expressive face that light up classic dance movies...relentless misery to which Aronofsky subjects his heroine. Portman’s face quivers and her eyes brim with tears in almost every scene.
Dennis Lim, Slate  Is mostly filmed in choppy convulsions...Aronofsky, to put it bluntly, just loves a freak show...emotionally inert.
But it's the start of a New Year. It's time to stop this churlishness and to put on a happy face. It turns out there actually are a bunch of engaging ballet-themed movies out there. All the films below except Mao's Last Dancer are available on Netflix. The capsule summaries are lifted from Netflix.
THE RED SHOES Everyone's favorite ballet movie. And mine. A classic. And not a single handheld camera shot. And Moira Shearer, a real dancer. 1948
Fledgling ballerina Victoria (Moira Shearer) falls in love with brilliant composer Julian (Marius Goring) while they collaborate on a ballet that makes her a star. But overbearing company owner Boris (Anton Walbrook), jealous of their love, fires Julian and forbids Victoria from performing. Julian and Victoria wed, and his career takes off, but she longs for an opportunity to dance. When Boris makes an offer, she faces a heart wrenching choice.
DANCING ACROSS BORDERS A critically acclaimed film created by a good friend of ours. Follows the rise of a young male dancer's transition from Cambodia to the West. 2010
Art enthusiast and philanthropist Anne Bass makes her first foray into filmmaking with this moving documentary that traces the journey of a talented young Cambodian man in his transformation from street performer to classically trained ballet dancer. Discovered by Bass in his native land, Sokvannara "Sy" Sar must learn to assimilate to the rigid structures of Western ballet to fulfill his dream of becoming a professional dancer.
THE COMPANY A gem,this little-known Robert Altman film features the Joffrey Ballet of Chicago. 2003
A young dancer (Neve Campbell) is focused on becoming a principal dancer with her ballet company, but finds it progressively more difficult to stick to the demanding schedule that's required. As the pressure mounts, she grows more preoccupied with other interests and with her boyfriend (James Franco), who vies for her time. The story is based on Campbell's own experiences at the National Ballet School of Canada.

THE TURNING POINT Baryshnikov is in it. And Leslie Browne. Real dancers. A very watchable chick-flick.  1977
Herbert Ross's classic drama from the 1970s stars Shirley MacLaine as DeeDee Rodgers, a former classical ballerina who cut short her rise to fame when she decided instead to settle down and raise children. But when her daughter, Emilia (Leslie Browne), shows promise as a ballerina, DeeDee is forced to confront the choices she made in the past and face off with Emma (Anne Bancroft), a famous dancer who longs for what DeeDee has.
WHITE NIGHTS The clip below of Baryshnikov and Gregory Hines is a treasure. The movie may not be. But who cares? 1985
In this dance-filled drama, Mikhail Baryshnikov plays a Russian defector who finds himself back in the Soviet Union after an emergency forces his plane to land there. This time, the KGB wants to make certain he stays in the country. Confined to his old apartment and supervised by an American dancer (Gregory Hines), who may or may not be trustworthy, Baryshnikov plots his escape.

CENTER STAGE Haven't seen it yet. 1999
Vying for a spot in the prestigious American Ballet Company, 12 ambitious dance students are ready to push their bodies and minds to the limit to realize their ultimate dream. With the recital audition looming and their futures on the line, conflicts within the group result in jealous backstabbing, petty criticism and heartbreak. Peter Gallagher leads the cast -- composed largely of professional dancers -- as the troupe's choreographer.
MAO'S LAST DANCER  Not yet on DVD. Haven't seen it. 2010
A delegation from Madame Mao's Beijing Dance Academy selects 11-year-old peasant villager Li Cunxin to study ballet in far-off Beijing, where he trains for seven grueling years to become one of China's greatest dancers. His efforts win him the opportunity to dance in America, opening his eyes to a new love and the possibility of a dramatic defection from China in this remarkable true story based on Cunxin's autobiography.
BILLY ELLIOT Later made into a sensationally popular (but too sappy for me) musical. 2000
When 11-year-old Billy Elliot (Jamie Bell) trades boxing school for ballet lessons, his father (Gary Lewis) -- a hardworking miner from Northern England who despises the idea of his son running around in toe shoes -- is less than pleased. But when the boy wins an audition for the Royal Ballet School, he experiences a change of heart. Stephen Daldry directs this Oscar-nominated drama that spawned a Tony-winning Broadway musical of the same name.
Finally, if you really insist on seeing a black swan movie, try "The Black Swan," a 1942 "Red-Blooded Roaring Adventure" that "Sweeps Across the Screen with Spectacular Fury," starring Tyrone Power and Maureen O'Hara. They don't make 'em like that anymore. 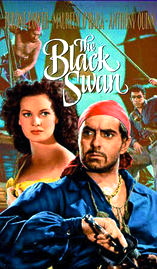