Once upon a time in America, we built great things.  We created nation-building canals, giant dams, coast-to-coast railroads, massive bridges, unprecedented war machines, national highways, and awe-inspiring spaceships.  These projects were expensive and they took a long time to complete – years, even decades.  But they served a useful purpose, were popularly accepted, and have had a profound impact on strengthening the infrastructure of our country and enriching our lives.

In 1825, the Erie Canal, financed by New York State, connected Lake Erie to the Hudson River. The 363-mile waterway effected a huge reduction in transportation costs, helped open up the West, and established New York as the leading port in the country.
In 1863, the transcontinental railroad was completed, linking the East and West coasts. 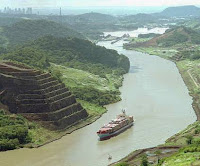 In 1914, the United States finished construction of the Panama Canal, one of the largest engineering projects in history. Under the aegis of Theodore Roosevelt, its impact was enormous, shortening ships’ voyages between Atlantic and Pacific oceans from thousands of miles to 48 miles. 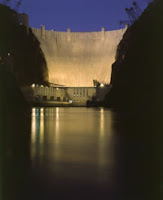 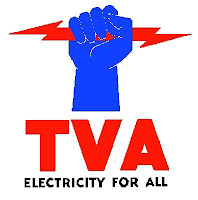 During the Great Depression, a host of new initiatives helped create jobs and restart economic growth. Hoover Dam (right), then the largest in the world, was completed and Grand Coulee Dam started. Among the more successful FDR programs were the Tennessee Valley Authority and the Works Projects Administration. The WPA built thousands of schools, hospitals, bridges, parks, sports stadiums, sewer lines and myriad other public works. At its peak, it employed over three million. Funding reached $2 billion annually ($30 billion today adjusted for inflation).
World War II led to the Manhattan Project, which ultimately spawned nuclear power as a byproduct. Radar was perfected. Aircraft and ship production reached unprecedented levels.

Perhaps the last major infrastructure effort by the United States in the last 50 years was the interstate highway system. President Eisenhower signed into law the Federal-Aid Highway Act of 1956.The program featured a 41,000-mile network of limited-access roads linking 90 percent of all cities with populations of more than 50,000.  The Federal Government contributed $25,000,000,000 [$192 billion in current dollars!] among the states over the following thirteen years. 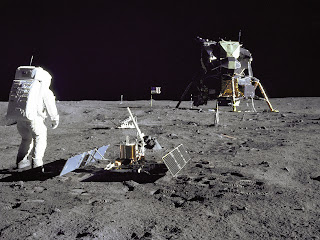 The Apollo program, initiated by President Kennedy in 1961, was successfully realized in 1969 with the successful landing of men on the moon. Apollo was a reaction to the twin scares from the Soviet Union’s space program. First was the shock of the unmanned Sputnik in October 1957, the world’s first artificial satellite. Second was the flight by Yuri Gagarin in April 1961.  He became the first man in space. Just over a month later, Kennedy announced the Apollo program, thereby initiating a race to the moon (a race, by the way, that the Soviets never bothered to enter).
While the Apollo program was successful in exciting the public and in developing a capability for human spaceflight, it was less successful when undergoing a cost-benefit analysis, particularly compared with robotic spaceflight. The latter has about two orders of magnitude lower cost than human flight, with about two orders of magnitude higher productivity and scientific research. Unmanned satellites have revolutionized communications, navigation, weather forecasting, mapping, and astronomy.  Not as sexy as humans flying around in spaceships, but a much bigger bang for the buck.
Looking at the list of infrastructure achievements, most were phenomenal. Some were responses to hot or cold war challenges. Others were peacetime improvements to our infrastructure that yielded a stronger and more vibrant nation. They created jobs, strengthened the economy, and helped raise our standard of living.
But as they say, what have you done for me lately? In the 54 years since the interstate highway legislation passed Congress, nothing even close has followed. Five decades, zilch.
It’s not that we don’t spend money.  In the last two years we’ve spent massive taxpayer funds -- hundreds of billions of dollars -- allegedly in the public interest.  But regrettably, not for productive projects, not for infrastructure, not to accentuate the positive, but rather to eliminate the negative.  Unprecedented public funding has been used to rescue dying, mismanaged and inefficient industries. We poured enormous amounts into the financial sector. We saved the legacy automobile industry in order to preserve jobs. A short-term success, but a long-term mistake.
Let's see what Intel’s former CEO, Andy Grove, said about this in a Wall Street Journal op-ed, likening the technological revolution that hit the computer industry three decades ago to the one now reshaping the auto industry:
The transformation of an entire industry does not happen very often. It only occurs when a number of factors align, such as a change in consumer demand, a shift of parts of the major supply chain from one country to another, and the emergence of key technological changes…
This is what happened in the computer industry in the 1980s and '90s [when all the mainframe companies were hemorrhaging money]…
Imagine if in the middle of the computer transformation the Reagan administration worried about the upheaval and tried to rescue this vital industry by making huge investments in leading mainframe companies. The purpose of such investments would have been to protect the viability of these companies. The effect, however, would have been to put the brakes on transformation and all but ensure that the U.S. would lose its leadership role…
The PC changed [the industry.] In just a few years, the industry was pulled apart and reassembled…
The government's investment in General Motors might be directly helpful if the auto industry only had the recession to contend with. But that is not the case. The industry faces the confluence of a world-wide recession, rising fuel prices, environmental demands, globalization of manufacturing, and, most importantly, technological change involving the very nature of the automobile…
Electric cars have become viable and will likely only become more capable in the future... Electric cars may match the needs of our time better and become more desirable than cars relying on the internal combustion engine…
The U.S. government is investing in the automobile industry with the intention of preventing jobs from being lost. This may improve GM's ability to operate within today's structure. But there is no comparably large investment being made to develop the capabilities that could serve the company in a new era of electric cars.
China appears to be making a different bet… China is putting a great deal of effort into developing and manufacturing batteries. Essentially, it is betting that it can take the lead in creating the foundation technology of what will likely be the new structure of the auto industry.


I agree with Grove.  A massive federal investment in developing new battery technology would pay great dividends. One by one, the world's automakers are exploring with varying degrees of enthusiasm all-electric vehicles. But to make them truly practical – not just a second-car option -- a new generation of battery technology is required. The energy density and recharge time of today’s lithium-ion batteries are simply not adequate to allow for widespread replacement of internal combustion autos.
As the owner of an all-electric car (a 2008 Tesla Roadster), I can enthusiastically testify as to the excitement of driving the car -- it accelerates from 0 to 60 miles an hour in 3.9 seconds. But the limited range (200-plus miles if you drive it prudently) creates "range anxiety." That is, as approach its maximum range, you start getting really anxious.  You're not sure just how far you can go before you deplete the battery. And you don’t want to get stranded; there's no quick fill-up at a nearby filling station.  The recharge time from dead battery to fully charged ranges from four hours (with a 220V, 70 amp line) to 40 hours (with a standard 110V line).
We need a massive investment in new battery technology.  Batteries unfortunately are not beneficiaries of Moore’s Law, an observation that over the last five decades semiconductors have doubled their performance every year-and-a-half to two years. We need battery breakthroughs, but if someone is making a massive investment in battery technology, it’s not in this hemisphere.


Another Investment Idea -- A Real High-Speed Rail Program
There is one new infrastructure plan that’s getting a lot of attention right now -- high-speed rail. Indeed, last week the US Department of Transportation announced that it was awarding $8 billion to states across the country “to develop America's first nationwide program of high-speed intercity passenger rail service. The President’s bold vision for high-speed rail is a game changer,” said Transportation Secretary Ray LaHood.
Sound good? It sure does. Until you look at the numbers. It turns out that $8 billion, plus an additional $1 billion per year for five years, is still chump change compared to what's needed and what other countries are doing to create nationwide high-speed rail service. In fact, it’s a number well short of. say, the $17 billion we spend annually on candy.  The paltry size of the proposed new rail program is maddening: it’s big enough to get people excited, but not enough to really make a difference.  And it doesn’t begin to compare with what’s happening elsewhere in the world.
We're all familiar with what's happening abroad. Japan has had its bullet trains for decades. France has the TGV (Train à Grande Vitesse), and similar programs thrive in Germany, Spain, Italy, South Korea and Taiwan. But the real game changer, as with so many other advanced developments, is happening in – you guessed it -- China.
Recently, China leaped ahead of the world by opening the world’s fastest long-distance passenger train service. The Harmony Express covers the nearly 700 miles from Guangzhou to Wuhan in less than three hours, compared with 11 hours previously. By comparison, the fastest American service, the Acela, takes the same time to travel the 225 miles between New York and Washington, D.C.  One-third the distance in the same time.  That’s embarrassing.
But the Harmony is just a harbinger. As Fortune reported last August, China's high-speed rail program calls for 16,000 miles of new track to be installed by the year 2020. Their spending in 2010 alone will be $50 billion. Total program spending will reach hundred of billions of dollars.
The next major link will be between Beijing and Shanghai. Traveling at a peak speed of 220 miles an hour, the train will traverse the 665 miles, including stops, in less than four hours.
Imagine traveling on the ground from New York to Chicago, a comparable distance to Beijing-Shanghai, in less than four hours. No airport hassle, few weather delays, no ramp waits, more civility. And remember this, if you want to get discouraged: Today’s commercial air experience is worse than it has ever been -- but better than it will ever be. Trains, anyone?
Not everyone is enamored of high-speed rail for the United States. Indeed, in an op-ed piece in yesterday’s Wall Street Journal, one critic of high-speed rail claims that it is "driven by little more than a romantic notion to confer a European ambience on American cities." He criticizes the DOT plan for being too ambitious.  (Too ambitious?) And I find it interesting to read through an 834-word essay railing (so to speak) against high-speed rail, yet mentioning nothing about the revolutionary (so to speak) program in China.
Critics claim rail travel will always be inefficient and costly.  But to compare the economics of old passenger-rail technology to the new high-speed revolution is like comparing internal-engine, propeller-driven aircraft to modern day jets.  High-speed rail will offer new economics and new passenger experience.
Unfortunately, you'll just have to imagine a world-class high-speed rail program in America, because it ain't gonna happen.  Not in my lifetime. Simply put, major infrastructure projects take years or even decades to complete, a period far longer than most politicians' terms of office. The costs of big projects are current, the benefits are in the future.
Spending a billion or two a year on high-speed rail sounds good, but it will just provide ammunition for the critics. Money will be spent, but nothing dramatic will happen. It’s another attempt to do it on the cheap. Too bad.
It's time for inspired vision. For innovative thinking. For big ideas. And in the United States, not just in China.


Your thoughts on a big new idea?  Just comment below: