TWO BROADWAY SHOWS AND AN OPERA

It’s been a busy theater week for us. First came two shows on Broadway -- Women on the Verge of a Nervous Breakdown last Friday, followed on Sunday by La Bête, and then last night Don Pasquale at the Metropolitan Opera. 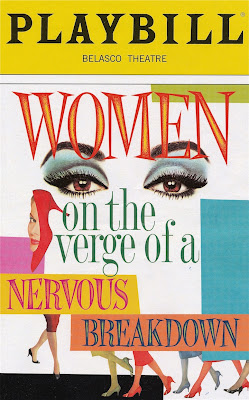 Women on the Verge of a Nervous Breakdown  We bravely went to see this show the evening following its opening, and the same day as disastrous reviews appeared in The New York Times  and The Wall Street Journal.  (In fairness, John Lahr in The New Yorker liked it. Go figure.) Undaunted, and hoping for the best, we ventured forth. And why not? Consider the talent involved.
This new musical is based on the film of the same name by Pedro Almodóvar, one of the great filmmakers of our time. The cast is A-list: Patty LuPone, Sherie Rene Scott, Brian Stokes Mitchell, and Laura Benanti.  They are stars, multiple-award winners, and among our favorites on Broadway.
And then there is Bartlett Sher, an amazing talent.  He directed one of the memorable musicals we've seen, Adam Guettel’s The Light in the Piazza (we saw it three times), the excellent revival of South Pacific, and two terrific opera productions at the Met – The Barber of Seville and The Tales of Hoffmann.
How could he fail? How could this team fail? How this not be a megahit?
Well, you can start with the book writer, Jeffrey Lane.  He transformed the Almodóvar movie into what I can only call a mess of a musical. Then there’s the composer/lyricist, David Yazbek (not one of our favorites), who put together a pedestrian score. Flawed book, forgettable music, uninspired lyrics --there's a start.
But there were other signs that a train wreck was in the making.  One example: the inexplicable decision by the creative team to stage a fire on a bed while Sherie Rene Scott was trying to sing right next to the fire. Aside from Scott's daunting challenge and the absurdity of the scene, the blaze sent a rancid chemical stench throughout the theater that lasted until intermission. The audience was not amused.
In the final analysis, I guess that talented people, whether in baseball or theater, don’t always pitch perfect games.  So Bart and Patti and Sherie and Brian and Laura – as we say down South, y’all come back again real soon, y’heah? We’ll be there. 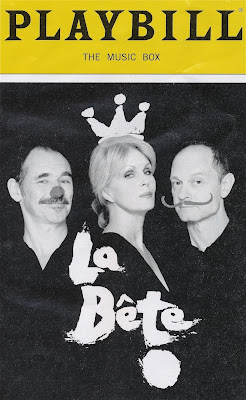 La Bête  It’s not often that one sees a play performed that’s written entirely in verse (probably for good reason). But if the play stars Mark Rylance, then you should beat a path to its door. Because there are few actors on the stage today with the versatility and talent of Mark Rylance. We first got to see him in London, where for ten years he was artistic director and a frequent actor in Shakespeare’s Globe Theatre. He’s appeared in 48 plays by Shakespeare and contemporaries, and won a Tony award for his role in the comedy, Boeing-Boeing.
The highlight of La Bête is watching Rylance deliver a riotously funny 25-minute monologue that includes, among other things, belching, farting, and defecation. Not your cup of tea? Let’s just say, it’s better than it sounds. And the monologue is a theatrical tour de force.
Don Pasquale   Donizetti’s opera buffa is also broad comedy, but it adds music and song. There are few funnier operas (maybe The Barber of Seville) and few sillier plots. But who cares? It’s opera. As Norina, the beautiful superstar Anna Netrebko sings and acts and mugs and somersaults, and nothing much else matters. Yet her co-stars, bass John Del Carlo as the aging bachelor and baritone Mariusz Kwiecien as his conniving physician, are her matches (except for the somersaulting). 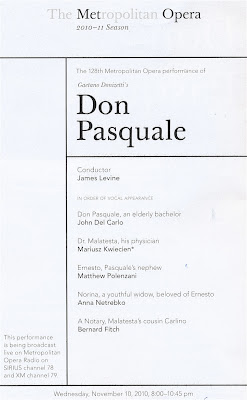 This opera is notable for at least one reason. As my friend, Joshua Ruch, reminded me last night, Don Pasquale is one of the few operas in the Met’s repertory -- three by our count -- that incorporates encores during the production. The baritone-bass duet in Act III, with its device of using rhythm and accelerating tempo to make a comic impression, brings the house down, and also brings the singers back for an encore. Similarly, in Verdi’s Nabucco, the chorus of the Hebrew slaves is always repeated. Finally, in Donizetti's The Daughter of the Regiment, after über-tenor Juan Diego Flórez sings the aria with nine high C’s, he is invariably coaxed by the audience’s tumultuous applause into giving an encore.