Reading about the plight of (former) Rep. Chris Lee yesterday, it was hard to ignore the photo that he posted to his would-be doxie. There was the handsome representative from western New York posing with no shirt on and showing off his reasonably well-defined pecs. Seeing a legislator dressed (or undressed) this way reminded me of the true, yet little-known, story behind the writing of the Second Amendment.

Just to get you interested, the Second Amendment does not mean what you think it does. It has nothing to do with guns. Never has a piece of federal law ever been so misunderstood. For over two centuries, everyone in this country has misinterpreted what the Founding Fathers had in mind. Now, for the first time, in an exclusive of Through Rosen-Colored Glasses, here is what they really meant when they gathered on that steamily hot day in Philadelphia to codify the rights of our newly independent citizens. 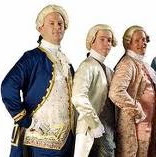 When I say it was hot, it was really a scorcher of a day. Nonetheless, our dedicated public servants had finished up on the First Amendment in the morning and were then proceeding on in the afternoon to frame the second. They had just begun the discussion when one member of the committee asked the chairman if, given the crushing heat, he could roll up his sleeves of his outer coat. Remember, this was not only pre-air conditioning, but it was a time when men wore decorative, multilayered and brutally warm costumes – wool, satin, frills, cuffs. Other members then asked the same permission, and it was granted. They all rolled up their outer coat sleeves.

But to little avail. They were still schvitzing. (You probably didn’t know Yiddish was spoken then.) They tried to write the rights, but they were just too uncomfortable. So another member asked the chair, “May we also roll up our inner coat sleeves.” Permission granted. And then later: “Our shirt sleeves?” Permission granted.

Sweet relief! They were all so happy with their new comfort, that they immediately got back to work and decided to share their newly gained right with all Americans for all times. And thus, on December 15, 1791, was adopted the Second Amendment to the Constitution of the United States of America:

The right of the people to bare arms shall not be infringed.

(Full disclosure: This idea was blatantly stolen from a New York Times op-ed piece of a couple of decades ago. I’d like to give credit where due, but extensive searches for the original have come up empty.)
Posted by Ben at 2:58 PM