Print media blues Given the declining fortunes of the print media – closures, layoffs, and the inexorable competition from electronic media -- who in the world would be crazy enough to start up a new print publication? Lewis Lapham would, that's who.  A couple of years ago, this grizzled and honored veteran of the journalism world eschewed conventional wisdom, created a not-for-profit publishing organization, and decided to fulfill a life's dream.  That dream is now Lapham's Quarterly. 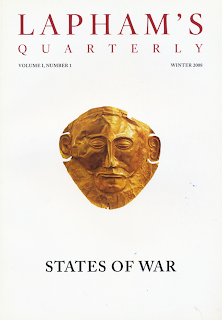 Lapham’s Quarterly devotes each issue to the exploration of a single theme. Since its start in 2008, the nine issues published so far have been devoted to:

What Lapham’s Quarterly Tries to Accomplish

The best way for me to describe this unusual magazine is to select these excerpts from the LQ mission statement: 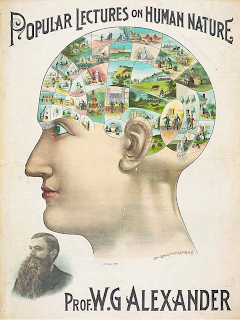 Published four times a year [which makes sense for a quarterly], each issue of Lapham’s Quarterly adopts and explores a single theme. Each is created with an aim to help readers find historical threads, say, from Homer to Queen Elizabeth I to George Patton, or from Aesop to Edith Wharton to Joan Didion. New essays from writers such as Stanley Fish, Fritz Stern, and Andrew Delbanco then knotted each theme together. 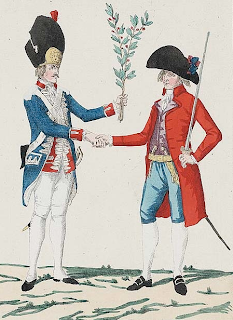 A typical issue features an introductory Preamble from Editor Lewis H. Lapham; approximately 100 “Voices in Time” — that is, appropriately themed selections drawn from the annals and archives of the past — and newly commissioned commentary and criticism from today’s preeminent scholars and writers. Myriad photographs, paintings, charts, graphs, and maps round out each issue’s 224 pages.

Lapham’s Quarterly’s modus operandi assumes that valuable observations of the human character and predicament don’t become obsolete — that the story, say, of an ancient Syracusan prison camp reverberates millennia later in the gulag of Siberia. None of the texts runs to a length longer than five or seven pages; others to no more than five or seven paragraphs (a telegraph to President Eisenhower from the parents of the Little Rock Nine, a love lyric of Sappho). With text enhanced with full-color selections of art, Lapham’s Quarterly draws not only from traditional sources such as literary narrative and philosophical commentary, but also from history’s underutilized scrapbooks: letters, diaries, speeches, navigational charts, menus, photographs, bills of lading, writs of execution.

Cicero made the point fifty years before the birth of Christ that, “Not to know what happened before one was born is always to be a child.” Lapham’s Quarterly recognizes and promotes Cicero’s notion that to know our history is to know ourselves; that, indeed, we have nothing else with which to build the future except the lumber of the past. By maintaining a keen focus on a single theme in each issue, LQ endeavors to reclaim our oft-forgotten history and to present it to a widespread audience. Issue by issue, Lapham’s Quarterly seeks to forge men and women from Cicero’s children, to spread a love of history to anyone who picks up a copy.

Who is Lewis Lapham? 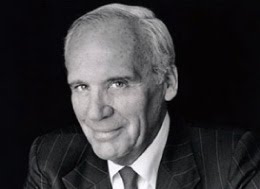 For those of you unfamiliar with the phenomenon known as Lewis Lapham, he was editor of Harper's Magazine for three decades. He is the author of numerous books, including Money and Class in America, Theater of War, Gag Rule, and, most recently, Pretensions to Empire. The New York Times has likened him to H. L. Mencken; Vanity Fair has suggested a strong resemblance to Mark Twain; and Tom Wolfe has compared him to Montaigne. A native of San Francisco, Mr. Lapham was educated at Yale and Cambridge. 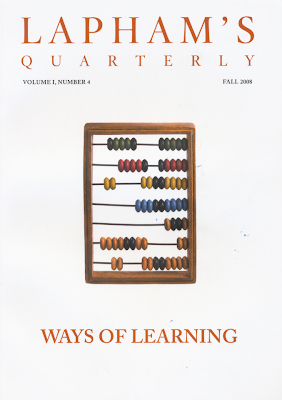 Finally, to round out his reputation as a maverick in the world of literary arts, Lewis is a leading exponent of the theory that the 17th Earl of Oxford, Edward DeVere, is the real author of all those great Elizabethan plays and sonnets, not that imposter from Stratford.

You could do far worse than turn off the football playoffs and curl up for a few hours with a copy of Lapham’s Quarterly. You won't be disappointed.