On my January 4 post, Rory Stewart -- Remember This Name, I suggested that this 37-year old wunderkind was headed for the highest levels of British government -- maybe even the highest. (No, not king. Just prime minister.)

The yet-to-be called British election is still perhaps four months away, but the assumption in the British press is that this first-time candidate for M.P. in the "safe" constituency of Penrith and the Border will be elected and will become a national force. Just read these excerpts from a remarkably adulatory 2,500-word piece published in today's Guardian:


"...Among the ranks of all the new ­parliamentary candidates on offer, from all parties, Stewart is blessed – or cursed – by standing out as being by a long way the most extraordinary..."

"...Whether Cameron will be able to listen to someone as honest and unusual as Rory Stewart is unclear. How Stewart will deal with the realities of life in Westminster is anyone's guess. That he will be Britain's most fascinating and most watched new MP is not in doubt..." [Emphasis added.]

The Guardian article is a good read.  And soon, in this country, there will be another good read -- The New Yorker is working on a profile of Stewart.

It's reminds me of the drumbeat crescendo that accompanied another politician, a young American, as he rose in a relatively short time from near obscurity to President. 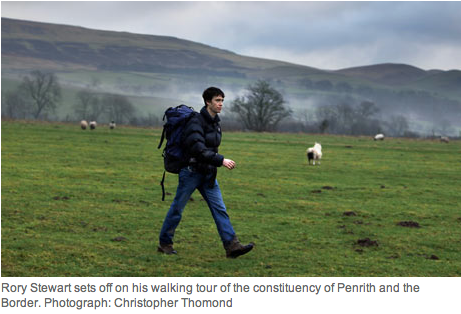