I remember it well. It was the fall of 1992. I was a guest at the Baltusrol Golf Club in New Jersey. During my round of golf, a member of our foursome noted my limping and my apparent pain. He asked me about it. I told him that I was suffering from osteoarthritis in both knees and was slated for bilateral total knee replacement. After which he said, "Boy, are you lucky. A friend of mine had exactly the same condition and also had an operation scheduled.  But he heard about a special Chinese herb, started taking it, and immediately felt so much better that he canceled his operation."
Well, that was enough for me. I immediately got the ordering information for the herbs, sent off my check, and ended up with an herb supply that would last me a year.
As soon as the herbs arrived, I started taking them, and like my golfing friend’s friend, I immediately felt better. In fact, the pain had disappeared – mirabile dictu.   I felt absolutely great and was about to cancel my operation.
That was when my secretary said to me, "I can’t help noticing that your speech is starting to slur. You're also beginning to take naps every afternoon. You may want to see a doctor."
So off I went to see a neurologist.  He subjected me to a complete neurological examination, and found absolutely nothing wrong. He couldn't account neurologically for my slurring or napping. I was about to leave his office when he asked me, "By the way, have you been doing or eating anything different in recent weeks." I told him that nothing in my daily regimen had changed, nothing that is, other than taking some herbs that helped get rid of my knee pain.
That was it. He immediately connected the dots. I wasn’t taking herbs; the “herbs” were narcotics. That experience led to my skepticism about the medicinal value of any herbs, botanicals, or unproved pseudo-medicines. (I did go through with the bilateral total knee replacement, and the knees have been pain-free for 17 years.) 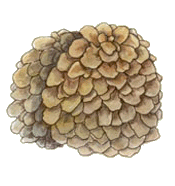 Flash forward to 2009. Donna became a patient at Memorial Sloan-Kettering Cancer Center (MSKCC). We learned that among the many resources available to patients, Sloan-Kettering has an Integrative Medicine Service (IMS) that complements the mainstream medical care at the hospital. One particular IMS resource that interested me (given my earlier “herb” experience) was the access to professional information about over-the-counter products and unproven cancer treatments. And in our discussions with the IMS staff of possible complementary therapies, there was one that they were highly enthusiastic about -- maitake mushrooms.
But first, if one does a general Web search for herbs, botanicals, and other such compounds, the claims made online or enough to make one believe that there is nothing that can't be cured. But as it turns out, very few of them have any scientific basis for the claims, any studies, any clinical trials. There is simply no proof of efficacy.  The information is anecdotal.
It turns out, however, that there is one really outstanding Web source of information about these compounds. It is on the MSKCC website and called About Herbs, Botanicals and Other Products. Among the useful information provided for hundreds, maybe thousands, of the of these products is a clinical summary, purported uses, constituents, mechanism of action, adverse reactions, herb-drug interactions, and lab interactions. I would suggest that you don't put any of these purported cure-alls into your mouth until you've researched them on this website.
Now back to the maitake mushroom.  According to the MSKCC herbs website, “The maitake mushroom has traditionally been used in Japan and China as part of the diet and to treat cancer… In laboratory studies, maitake extract was able to stimulate various cells and factors in the immune system. Studies in animals show that it also slows the growth of certain tumors and lowers blood glucose (sugar) levels.”
The maitake mushroom is one of the few of these over-the-counter products where scientific research is underway to test its anticancer effects and its possible strengthening of the immune system. Phase I and II clinical trials are underway at MSKCC. The results so far show only that it’s safe. Whether it has therapeutic benefits will be learned later, in Phase III. But there is already a high level of enthusiasm around the hospital about the possible benefits of maitakes, particularly with respect to its strengthening of the immune system.

Besides their being safe, I've been reliably assured that if you take maitakes you won't slur or nap.  However, I can't promise the latter won't happen from reading this blog.